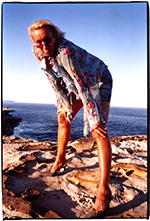 Lori is a force to be reckoned with! She is unique in everyway, a strong, sensual voice projected from a 185cm (6ft1") olive skinned, grey eyed blonde. If she were to be compared to anyone her powerful voice may be likened with Macy Gray, Chrissie Hynde, Renee Geyer or Seal.

But on stage this tall, leggy blonde struts it like no other. She has an electrifying, energetic and magnetic presence that totally absorbs everyone within view. She can be melancholy and gut wrenching one minute then hard hitting and rocky the next.

Lori has played at world renowned venues such as Ritz, New York; China Club, New York and Whiskey A Go Go, LA. She has also played and recorded with Joe Jackson Band and was the opening act for Dave Stewart (Eurthymics) Spiritual Cowboys Tour and musicala 'Rent' in LA and 'Hollywood PO'.

Once signed to Polygram US and EMI Publishing, Germany she is now residing in Australia and is contract free. This is one singer/songwriter that is well worth a listen to and if you are lucky enough to catch her live you'll be talking about her for years to come.

Talented, professional and powerful, this is one singer that will entice you the minute you see her belting out the first song.